How can we work together in Australia to fulfil God's calling in our unique destiny in the world?

beyond reconciliation is partnership

God bless you heaps as you continue to bless heaps of others!

Check out our new daily devotionals! 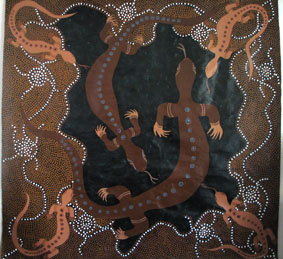 I’ve seen people who had only weeks to live, with all their internal organs shutting down, who were totally healed. I’ve seen a man who had not long to live with a very fierce bout of melanoma, totally healed in about two weeks – that was twenty years ago.

I’ve seen a flooded river subside in half an hour, which normally takes four days to go down. I’ve seen the multiplication of food amongst eleven people, and after they have all eaten and gone to bed the food multiplied itself again overnight. I’ve seen quite a number of people come out of comas who had been in car and motorbike accidents, and people whose heart was shutting down – all totally healed. I’ve seen young ladies in the trauma unit after a car accident and couldn’t walk, now totally healed and walking again.

I’ve seen dead birds whose necks were severed, hanging by a thread of skin - fly away out of my hand. I’ve seen a lady healed from a large gallstone. She had a 50-50 chance of survival. I prayed for her on a Wednesday and her operation was the next day, but when I saw her on the Friday, she was sitting on the end of the bed with a big smile. I said to her: ‘What happened?’ The doctors couldn’t operate because the gallstone disappeared on Wednesday night and their camera could find nothing.

Another time my wife and her auntie prayed for a young girl who was brain dead. We agreed for her healing. They were waiting for her mother to come before they turned off life support. Doctors said she would be a vegetable if she lived.  She is now healed and working for the Aboriginal Health service.

I’ve cast out thousands of demons in Jesus Name from a young Noongar girl over three days and she was set free. I’ve gone to mental institutions and private houses, and freed people of demon possession and oppression. I’ve even gone to Graylands (the ‘mad house’) and freed a young Aboriginal girl from oppression in two days by the power of Holy Spirit.

I’ve seen a huge dead tree come back to life again. I’ve prayed over a totem pole erected for satan’s glory. Two weeks later a thunderstorm came through this town and a lightning bolt came from heaven and hit that wooden pole and smashed it into thousands of pieces. I’ve helped a white doctor to be set free from an elder practising witchcraft over him and he became a Christian. So I baptised him in a dirty waterhole out of town full of broken beer bottles.

The list of healings and miracles goes on and on… I have photos and phone contacts to verify many of them.

I’ve done all these exploits through the power of the Holy Spirit over the last 41 years without pay or being paid. I’ve worn out six motorcars travelling to do this, and worn out the heels of about twenty pairs of shoes.

Why I am telling you of all these healings and miracles is because of this: during the past sixty years, I’ve heard many pastors preaching and people speaking that they are going to disappear at any moment. It could be at midnight, or it could be at daybreak, that they are going to leave this ‘ole world behind. They call this event The Rapture. There is a video about this event called Left Behind.

You see I am one of those people who are left behind. My contract runs out at the end of this age – the Last Days. I have no option but to fulfil and complete my assignment called the Great Commission: “Jesus came, and spake unto them, saying, All power is given unto me in heaven, and in earth. Go therefore (Rodney), and teach all nations, baptizing them in the Name of the Father, and the Son, and the Holy Ghost, Teaching them to observe all things whatsoever I have commanded you: and lo, I am with you alway, until the end of the world. Amen. (Matthew 28:18-20, Geneva Bible). I have to make disciples in all nations starting in Australia - not just converts.

I have said all this to say this:

“Well, if you are going to disappear at any moment now, I was just wondering, prior to your rapid departure from this ‘ole world, could all you people put one third of your money into this Commonwealth Bank account – R T Rivers BSB 0661341 A/c 0674050 – and also assign all the sales of your assets, cars, houses, churches, buildings, etc. into this account.

“It will be used for the Kingdom of God. I would like to purchase some aerial transport to go into the deserts, Northern Australia and the rest of the nation to train people in the five-fold ministry and to prepare them for the coming of Christ.

“Please don’t leave your money for the non-Christians to use. I’m your brother and I’ll still be here in Australia to clean up this mess after you’ve gone. The Lord said: ‘Don’t take Rodney out of this world, but keep him from the evil one’ (John 17:15).

And when I reach that land of glory I will stand someday in the presence of Jesus Christ the Nazarene, and say to him: “I have fought a good fight, and have finished my course: I have kept the faith. For henceforth is laid up for me the crown of righteousness, which the Lord the righteous judge shall give me at that day: and not to me only, but unto all them also that love his appearing.” (2Tim 4:7-8). I will bow in adoration before Him and give the crown of righteousness back to Him.

Without God, man can do nothing. Without man, God will not do anything

Gee, it’s going to be lonely here when all you people go, but I guess I’ll have all your animals to keep me company.

In the Rupture, (No, that’s not a typo!)
- you are certainly going to break the sound barrier when you leave this earth.
Look out Heaven, here they come!!!

Verily, verily, I say unto you, he that believeth in me, the works that I do, he shall do also, and greater than these shall he do: for I go unto my Father. 13And whatsoever ye ask in my Name, that will I do, that the Father may be glorified in the Son. 14If ye shall ask anything in my Name, I will do it. (John 14:12-14 Geneva Bible).

I have made the former treatise, O Theophilus, of all that Jesus began to do, and teach, Until the day that he was taken up (Ac 1:1-2)

God took the outcasts – rejected and despised Australian Aborigines – and transformed whole communities in a few days, first on an island in north Australia and later across Australia. This fire of revival transformed health, hygiene, attitude to work and education, and brought true reconciliation and love between families, clans and tribes that had been fighting for many generations.

God created the earth and people - with His character in them - then put groups of people in different lands with different languages and cultures (Gen 1 & 11). So GOD was already in Australia before the British arrived with the Gospel. But for thousands of years those cultures that He created have been corrupted.  The Gospel came to Arnhem Land in the early 1920s and the Methodist Church established Galiwin’ku community in 1942 on Elcho Island, about 500km east of Darwin, N.T.

Australia – My Country: The Smoking Ceremony and its accursed effects

As an indigenous Aboriginal from the Kimberley in North-West Australia, it is my duty to alert the public of the dangerous consequences and the curses they will unknowingly put on themselves, their families and others when they are coerced into the promotion and rise of Aboriginal religion. Few people know what the smoking ceremony does. It puts a curse on people, and the results are devastating.

There are two sides to Aboriginal culture: the domestic and the religious. Hunting, cooking, family relationships, etc are part of the domestic side. The religious side involves ceremonies, rituals, spirit and idol worship, witchcraft, astral travelling, ancestral blood covenants, ‘singing’ people with curses to hurt or kill them.